Now that I have more free time I’ve assembled another DP’s pcb. A while ago Ian sent me a 0.50mm Dangerous xQFP protoboard. It’s quite a big pcb that allows you to work with xQFP chips along with several others SMD packages.

I soldered a MSP430F5510 and put other things thinking on making a development board for that MCU.

The board has a couple of temperature sensors. There is a TMP102 in a SC70 package soldered in the SOT-23-3/5/6 (6x) area, this is a really tiny temp sensor with an analog output.  Near the TMP102 I put a couple of transistors, there is a BC817 and a BC807. I’m not sure if I’ll be using these that much but soldering them was an interesting exercise.

There is also space for a couple of SMD buttons but I didn’t have any of those so I bent the leads of a couple of through hole tact switches and soldered there along with a pair of 10k pull up resistors.  Also, all the LEDs are in place along with 330 ohm resistors.

A TMP175 is soldered in the SOIC(W) area. This chip comes in a SO-8 package, much easier to solder than the other sensor. The TMP175 has a digital output and communicates through an I2C interface.

Above the TMP175 there is a real-time clock. It’s a BQ3200 serial RTC with battery backup and I2C interface. This area has quite long pads on one side (in order to support wide SOIC packages) which gave me enough room to put the 32Khz crystal there.

The power bus is routed near all components making it really easy to solder wires on the back of the board to power the chips.

The pin through-hole prototype area is populated with female pin connectors to make some sort of bread board. I put also a 28 dip socket because the female connectors don’t make good contact with the IC leads.

I was kind of scared after soldering the MSP430 because whit the soldering iron’s tip I bent some of the leads and a couple of them were touching together. 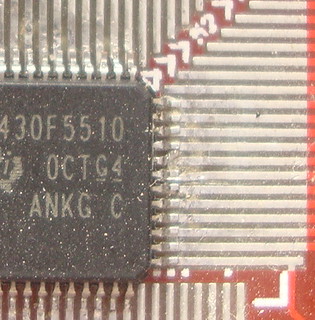 Those pins are from one of the mcu ports so I tried a simple Hello World! program to find out how bad things were. Unfortunately there was a short and after trying for a while I was able to fix the problem by breaking the electrical connection with a precision knife, it doesn’t look very good though.

The board is working now and it has plenty of space for other things. I have something else to play with this summer, thanks Ian!