I have a few MSP430G2955 around but non of my Launchpads are capable of programming this MCU. Texas Instruments released a while back all the informtation needed to build the new ez-FET lite. The eZ-FET lite is a low cost USB-based on-board emulation solution for MSP430 microcontrollers. This debuger supports all MSP430 devices compatible with SBW programming and I could use it to program the MSP430G2955.

The hardware is based on an MSP430F5528 and I used a QFN version with an adapter board:

In order to program the MSP430F5528, I tried first using the FET-Pro430 from Elpotronic. I was able to flash the BSL firmware:

despite an error dialog about code size:

…then, I programmed the ez-FET firmware:

After reseting the programmer all the drivers were installed:

But every time I tried to program a device with CCS I would get this error message:

According to this post the error might be caused by the the custom BSL portion of the ezFET firmware being not properly flashed.  I did read this other post in 43oh about flashing the firmware with MSP430Flasher, I just wanted to see if the Elpotronic software would work.

I tried  to re-program the MSP430F5528 using MSP430Flasher but I get this “BSL memory segments are protected” error.

According to this post I have to add options to unlock  BSL memory as well as the INFO A memory. I added for that -b and -u:

Success!! At least the BSL.  Then I attemped a firmware update with MSP430Flasher: 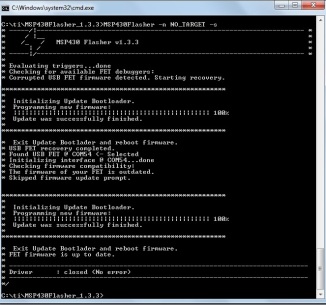 More success!!! I should have tried this in first place…

Anyway, I tested the programmer with the old and beloved “blink” and It’s working. I still need to test the UART interface but this should work as well.